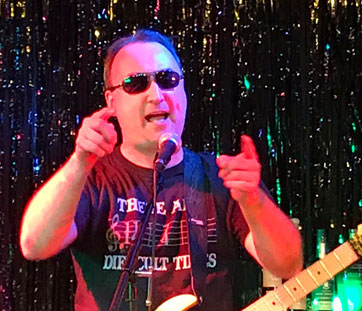 A lifetime love affair with music

Jeff Fox is a musician and songwriter from Fairfield County, Connecticut who's music spans multiple musical genres and styles. He grew up loving music from a very young age, joyously singing Merle Haggard songs for the family as a child. At age 16, Jeff purchased his first Fender electric guitar, began taking lessons and writing songs, and the rest, as they say, is history.

After starting college to become a graphic designer, Jeff pivoted and spent two years studying at the Berklee College of Music in Boston. He studied Music Production and Engineering with world-renowned professors and worked to hone his craft as a guitarist. He also began his love of writing and recording original music, something he does to this very day.

Following Berklee, Jeff took the time to start a career and then a family, but always kept his love of music. He returned to the world of music performance by participating as a singer in the Wilton Rocks for Food charity music show in Wilton CT in 2016. He has since become a regular part of the Fairfield County live music scene, performing both solo and with his band, the Debifibrillators.

But these are only worlds. A better way to get to know Jeff's music is to see it live in person. See what show's are coming up or send a note to request a performance at your next party or event!